Flashback: Email Chain a Hoax; The Poem is Very Real 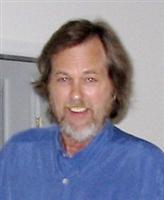 I wrote this back in 2008 after receiving the “hoax email” several times. So working with the help of the internet (what did we do before it?) I tracked down the actual author of the poem, a Dr. David L. Weatherford. Today I decided to check up on David as I knew back then he wasn’t in the best of health. Again, through the internet I found he died 2 years ago. No fanfare and barely a blip on the obituaries. So, with that in mind, I reprint the below in his honor. END_OF_DOCUMENT_TOKEN_TO_BE_REPLACED

Kidnapped Girl’s Father: I Am Coming

Two weeks ago, Samantha Koenig was selling coffee in an Anchorage, Alaska hut common for the region. Surveillance tape shows someone breaking in, robbing the place and taking Samantha by force. She hasn’t been heard from since although some news reports indicate police are making “some progress.” Below is a message Samantha’s father has for whomever did this. Like James Koenig says, do the right thing. END_OF_DOCUMENT_TOKEN_TO_BE_REPLACED

Corrections to the Lacey Gaines Story

Getting things right is what we strive to do but from time to time, some misinformation gets through. Usually it’s not done intentionally, it’s the way memories work or stories passed down getting a little tweak here or there. In any case, Lacey’s mom Gilda Gaines, who reads here, let me know what the discrepancies are. And here they are for you. END_OF_DOCUMENT_TOKEN_TO_BE_REPLACED

Dr. Paul McGarry is getting more attention than he probably wants right now. You remember him. He is the one Harrison County Coroner Gary Hargrove and lead investigator Thomas Pustay said examined Nikki LaDue January’s body after she was found with a gunshot wound to the head.  Well, it appears the good doctor isn’t that good at all. Last year, in a story NOLA.com did on the investigation into police brutality and the death of an inmate, McGarry’s work ethic was hung out for all to see. And it’s ugly.

McGarry never examined Robair’s ruptured spleen. Nor did McGarry examine or dissect Robair from the waist down. If he had, he would have found massive hemorrhaging and bruising, consistent with baton strikes or kicks, Sperry said. Though these injuries may not be seen with the naked eye, it’s imperative that pathologists look beyond the skin for clues, especially in a death that might have stemmed from a police encounter, Sperry said.

“It should be classified a homicide,” Sperry said of Robair’s death.

Coroner Frank Minyard, relying on McGarry’s autopsy, ruled Robair’s death accidental. In announcing his ruling in August 2005, Minyard said Robair had suffered his fatal injuries before  his encounter with police. Minyard also said the autopsy did not find any wounds indicative of a police beating.

As if that weren’t enough, PBS Frontline did a documentary called “Post Mortem”. The description of the program? WARNING! Don’t die in the wrong state. And who do they spend a good deal of time talking about? That’s right, Dr. Paul McGarry. It’s an interesting program. It lasts an hour but if you’ve got the time, here you go.

As parents & families of children who were abducted, sexually assaulted, murdered, recovered or are still missing, the Surviving Parent Coalition is calling upon the United States Congress to pass H.R. 1300 S. 702 The Help Find The Missing Act (Billy’s Law).

We are passionate about funding for the National Missing and Unidentified Person System (NamUS). Many of the members of the Surviving Parent Coalition still have a missing child. NamUS gives hope to a searching family to bring their missing loved one home. We know that we represent thousands of families suffering for the loss of their child, brother, sister, mother or father and every single one of our loved ones matters. END_OF_DOCUMENT_TOKEN_TO_BE_REPLACED

First let me put this out there. If there’s anyone out there with writing skills and a desire to help give exposure to cases that have gone cold, contact me (Norm.Holliston@gmail.com). Every day I get letters from people asking to look into their loved ones’ cases. I only wish I had the time to do them all. But I’d be happy to take on new writers who are willing to do this unpaid but very fulfilling job. Send me a writing sample about why you want to do this and I’ll get back to you. Now on to the current cases to be covered in the coming days and weeks.

END_OF_DOCUMENT_TOKEN_TO_BE_REPLACED 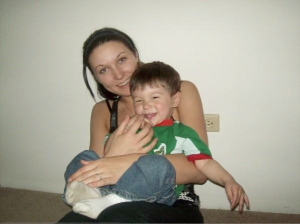 Lacey and her son Conor the year she died.

Lacey Gaines was murdered in her apartment on December 7, 2009 in Justice, Illinois. More than 2 years later, her killer has not been publicly identified nor have police indicated they are any closer to solving her case. That doesn’t mean nothing is being done. Lacey’s led a complicated life and either put herself into, or had no choice but to surround herself with people who think murder is just another way to settle a debt. Not all of her friends were like that. In fact she had quite a few allies including Cherry Simpson, Lacey’s aunt, who has tirelessly tried to find out who killed her niece. And she’s not alone. Several friends have spoken out on Lacey’s behalf. A social worker said Lacey had been physically abused by her boyfriend who also happens to be the father of their son Conor. Many friends said the same thing…she’d come to work upset and bruised. She said it was Daniel Rogelio Alvarado Sanchez who she desperately feared. Police say he is not a suspect. Then there’s her boyfriend at the time of her death, Juan Valadez who found her body in their apartment. He was with a woman at the time and had her call 911 because Juan spoke no English. And just like that, he disappeared. END_OF_DOCUMENT_TOKEN_TO_BE_REPLACED

Security footage shows a man, significantly taller than Samantha who is 5′ 5″ tall, wearing a dark hoodie and possibly a baseball cap, entering the shop then walking with Samantha towards Old Seward Highway. Police say all of the money was missing and have reason to believe Samantha was robbed.

This case has been classified as an abduction based on Samantha’s demeanor and the man’s actions seen on the tape.

Samantha is 5′ 5″ tall weighing 140 pounds with brown hair and eyes. 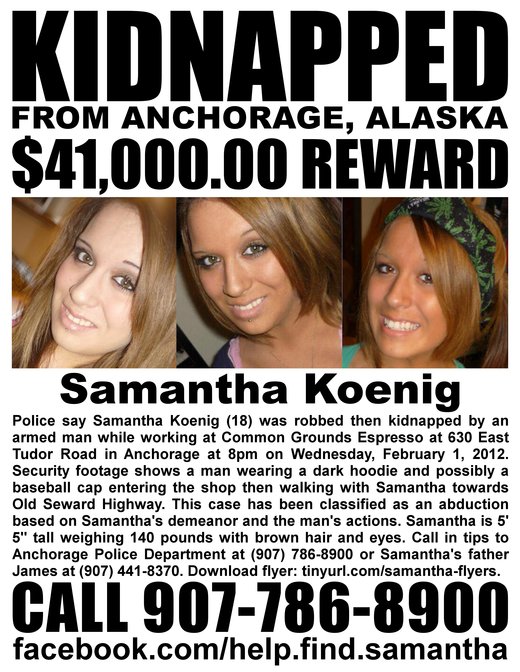